We interviewed Chihiro Yagyu, who won the Grand Prize for the COPIC AWARD: Next Generation Artist Prize and achieved his dream of having a solo exhibition.
Chihiro was only 10 years old when he won the prize, and his extraordinary originality and skills took everyone by surprise. When we saw his original drawings at the exhibition, we were impressed by the vividness and fine details of his art. 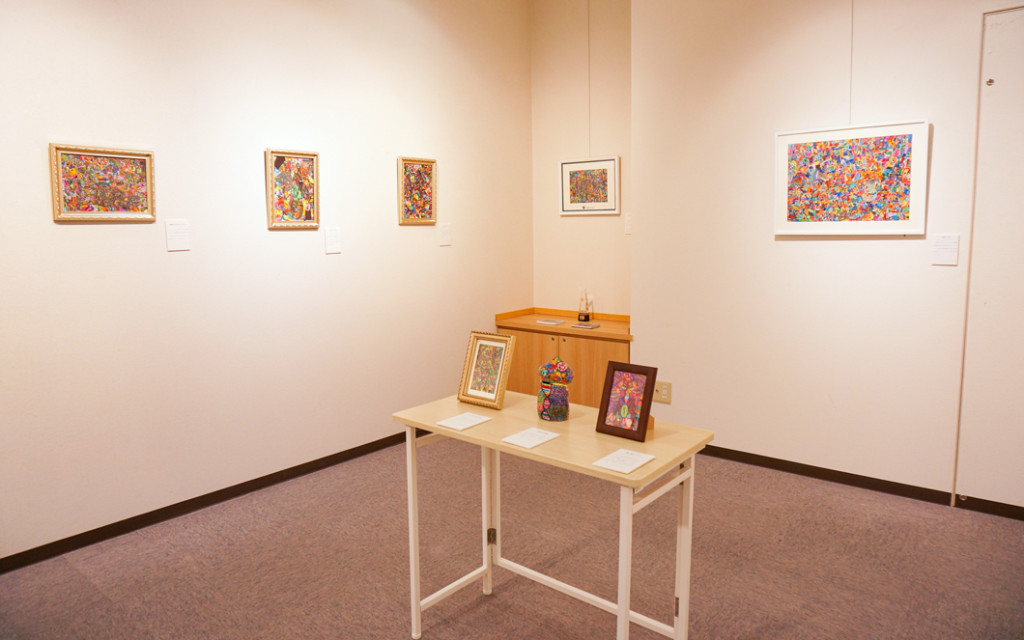 Feelings on the first solo exhibition/His first encounter with Copic

Q.Congratulations on having your first solo exhibition. How did you feel about having a solo exhibition?
Yagyu： I was nervous, but a lot of people saw my original drawings, and I was really glad. People also left many messages in the notes. Seeing their comments is very encouraging, and I think these notes are the best gift I have ever received.

Q.When did you start drawing?
Yagyu：I’ve been drawing since I was in preschool. I was always drawing, even after I became an elementary school student, but most of it was black and white.My dad used Copic markers when he was a student. When I was in fourth grade, he let me use his Copic markers for the first time, and after that I used Copic markers to draw with colors. 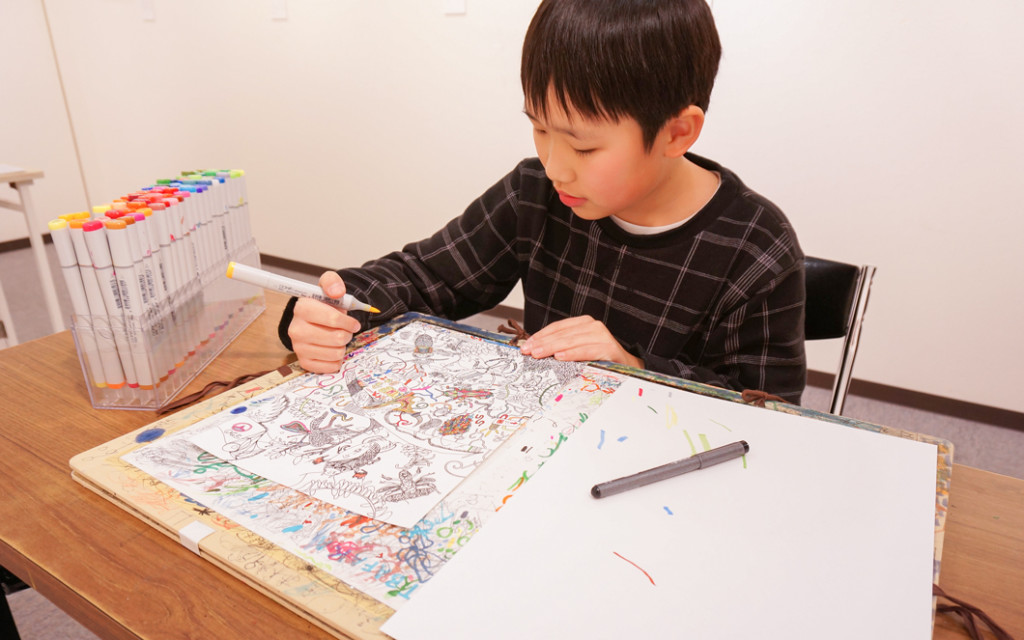 Chihiro is creating another masterpiece at his solo exhibition.

What has changed since Chihiro started using Copic

Q.What do you like about Copic?
Yagyu：I'm not good at using colored pencils or paints. What I like about Copic markers is that the colors are vivid, and the ink doesn’t bleed.
The ink might bleed depending on how you color with them, but if you color with them carefully, the ink doesn’t go outside the lines. I’m not really particular about paper, but I use Kent paper a lot. 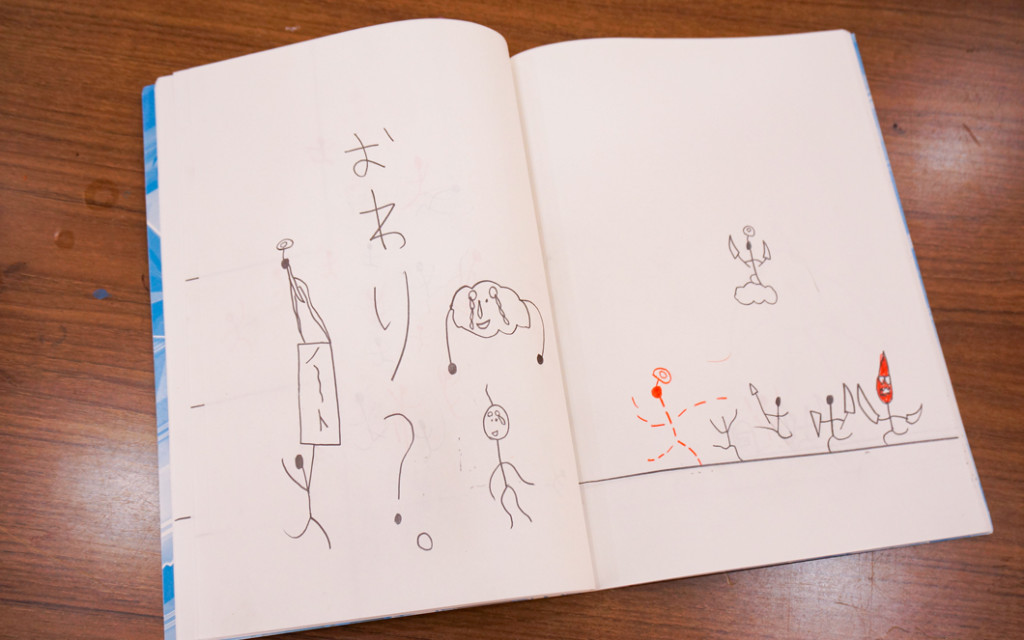 Doodles he drew before he used Copic markers. Most of them were stick figure drawings.

Q.You said you started using Copic markers when you were in fourth grade. It’s amazing to see how you started using gradation technique and how the way you use color has evolved over time. The most distinctive thing about your artwork is how you put together so many colors and motifs in your drawings. How do you decide which color to use in a particular part?
Yagyu：I know which color to choose. There's never any hesitation. I draw with the colors that just come into my head. When I’m drawing something, I focus and draw what comes to mind. I also talk to people and look around, and if I find a good idea, I use that. Even while I’m coloring, if a new motif or idea comes into my head, I start drawing and coloring it right then.

Q.What are your favorite motifs?
Yagyu：I like to draw middle-aged men. They are hiding in my drawings. But none of them are the same--they are all different men. One of my favorite characters that I have drawn a bunch of times is a weird middle-aged man called Tsuyoshi-kun. 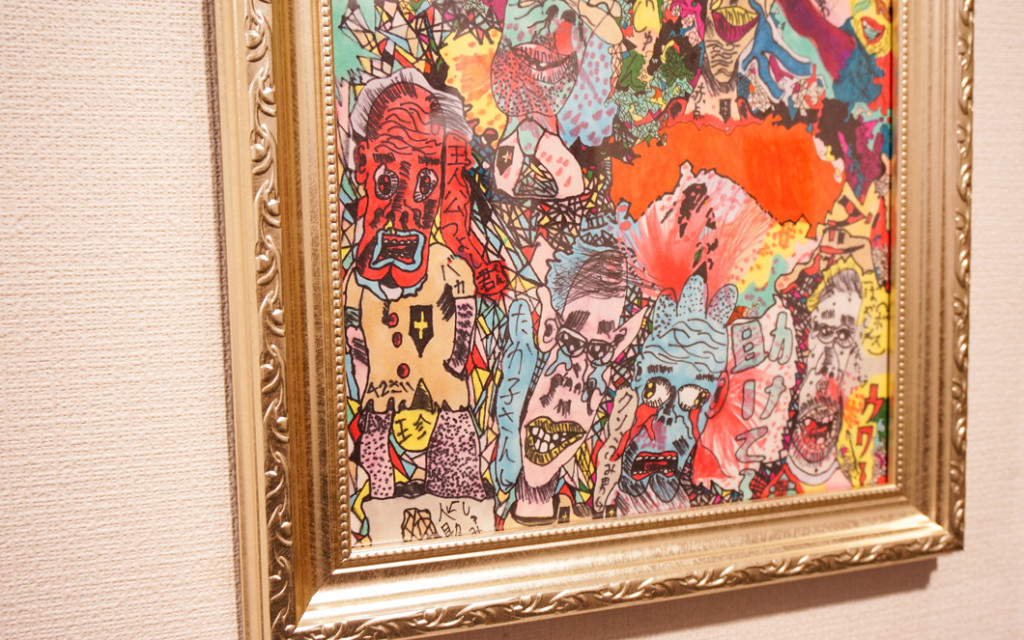 Tsuyoshi-kun, one of his favorite character

What Chihiro keeps in mind when he draws

Q.The Shuri Castle picture that you drew recently was also impressive.
Yagyu：I heard about the fire at Shuri Castle on the news. When I was drawing Shuri Castle piece, I thought that I wanted to help brighten up people who were sad, even just a little. I had never drawn buildings before, so I was worried at first, but a lot of people said that they were moved by it, so I was glad. I think I want to turn it into a product or sell the artwork and use the proceeds to help raise funds to rebuild Shuri Castle. 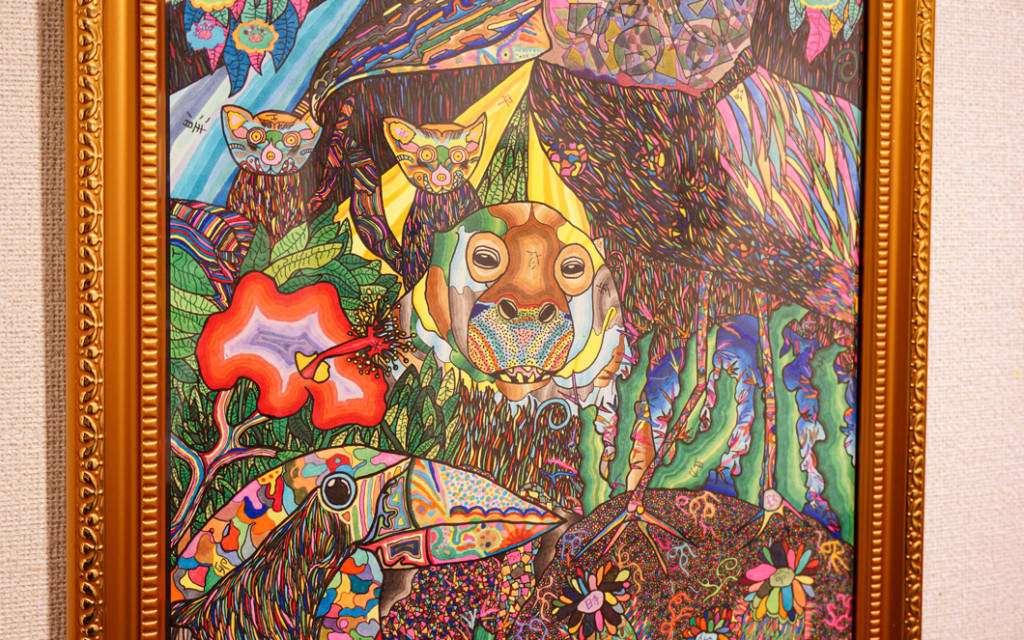 What it was like to enter the COPIC AWARD

Q. Why did you decide to submit an entry for COPIC AWARD 2019?
Yagyu：My dad was looking at the entry website and he introduced it to me. I liked how it wasn’t limited to elementary school students but to everybody regardless of their age.
I just continued to use the Copic markers that my father gave me because I liked them, and I think it's a miracle how I received the Grand Prize. I didn't expect to win an award, but I'm glad that I have continued to draw, and I want to continue drawing so that many people can enjoy my work. 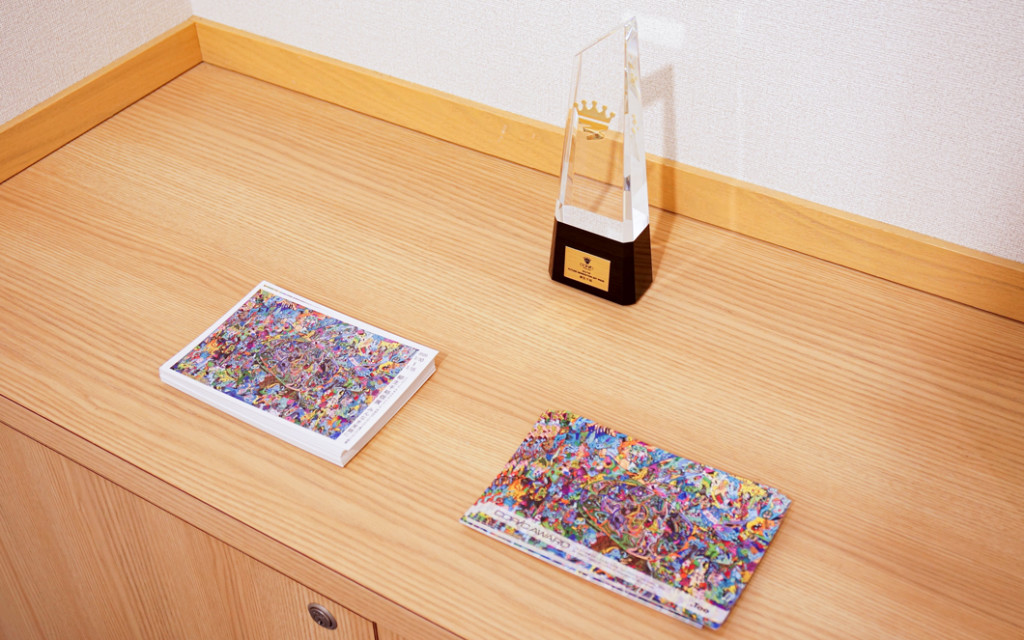 Q.Are there any points in your works that you would like people to notice or areas you think were well done?
Yagyu：I think I was able to draw a lot of different creatures in detail. If you look closely, there are a lot of letters hidden in the creatures. That's where I want people to look at.
Also, I wasn't sure how to create the feeling of being in the sea. Even though it’s underwater, I used a variety of colors because one blue color would be boring.

Q.Among other artworks entered in the contest, was there anything that caught your eye?
Yagyu：I saw a lot of different works during the entry period, and it made me think about how big the world is.
At the award ceremony, I was excited because I was able to see one of my favorite pieces titled “Red Light” (scenery of a town in the rain) finally. Also, I was surprised when I saw another finalist’s work that was just the head of a salmon fish. It was a big surprise to me because I learned that such an everyday thing could be used as a subject. I think it is important to be able to draw everyday things interestingly. 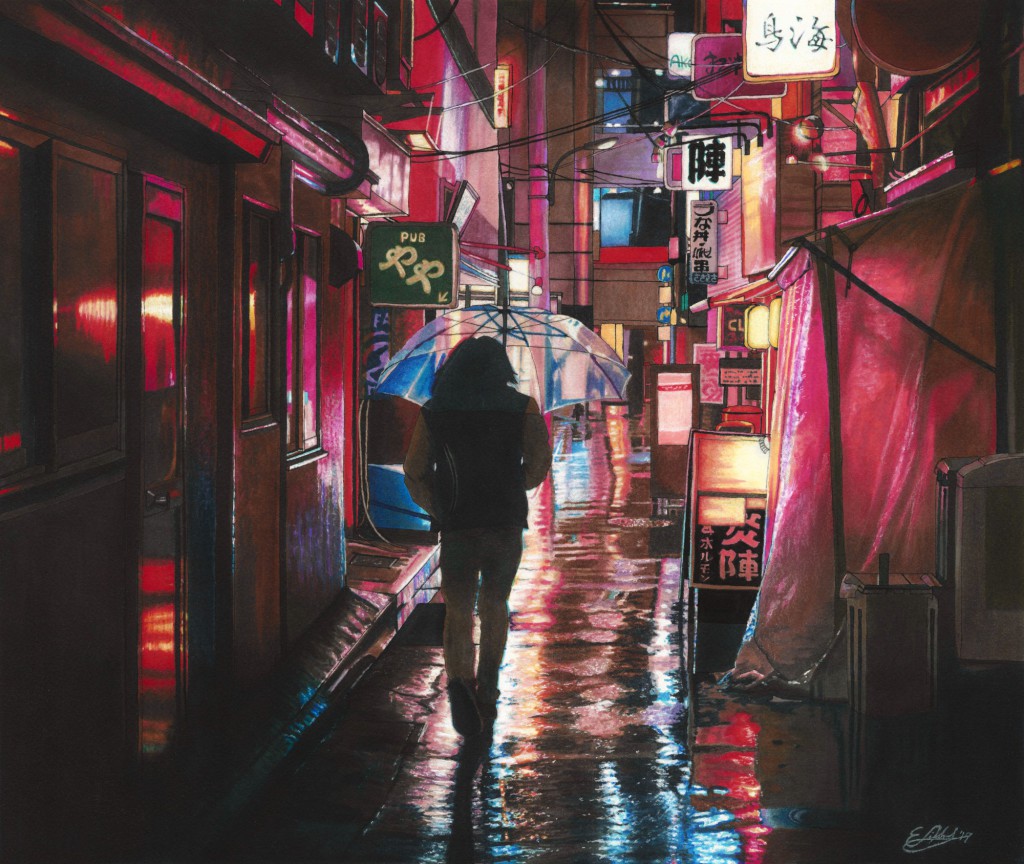 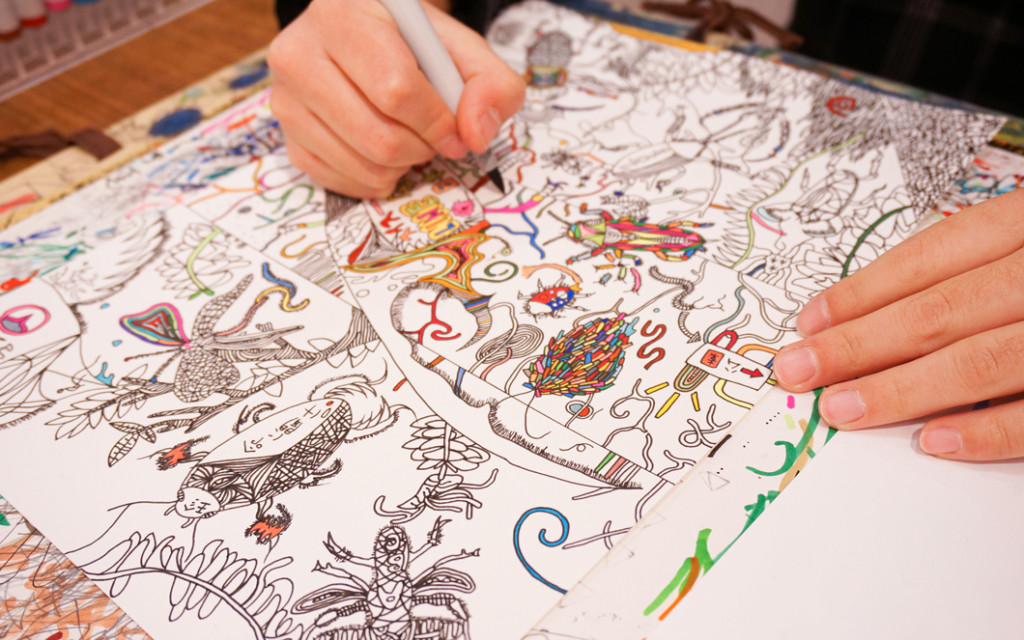 Goals for the future

Q.Is there anything you want to draw or challenge yourself with in the future?
Yagyu：I want to draw more animals and buildings, but I'd like to be able to draw familiar things in an interesting way.
Rather than being an illustrator, I want to be an artist who brings smiles to people. 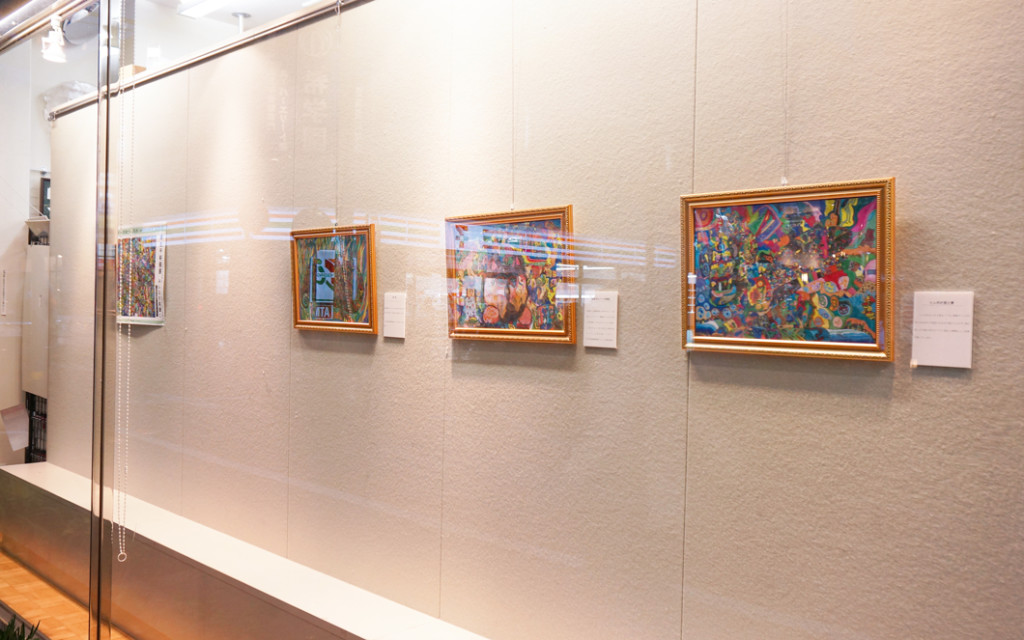 The venue was the Koufu Gaen. The gallery was on the street, so anyone who passed by could see the artworks.

Thank you Chihiro, wishing you many more successes in the future! 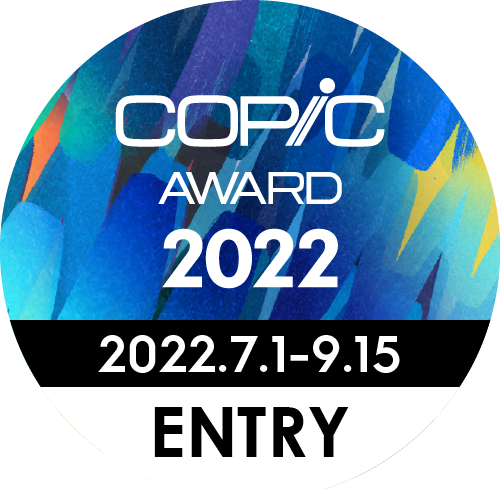