The winners of the COPIC AWARD 2019

After the rounds of judging, the COPIC AWARD winners were finally decided.
Very special congratulations to all of our award winners! 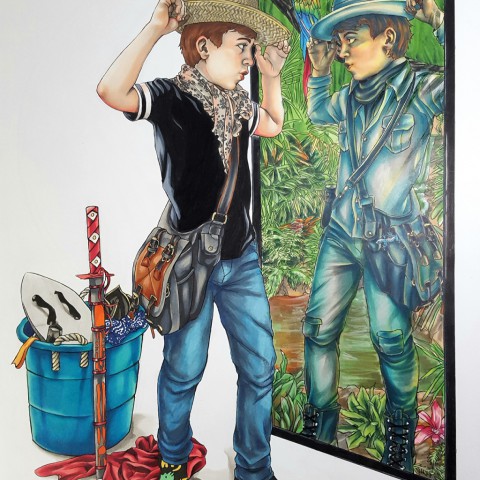 Grand Prize was unanimously decided. We see an innocent boy standing front of the mirror but maybe he’s seeing his future self. This is very imaginative, unique theme! Imagination is essential for art - That's what art is all about, actually. What to draw is very important. If you want to share it to the world, originality is very important. So please keep on pursuing your own world and be original. 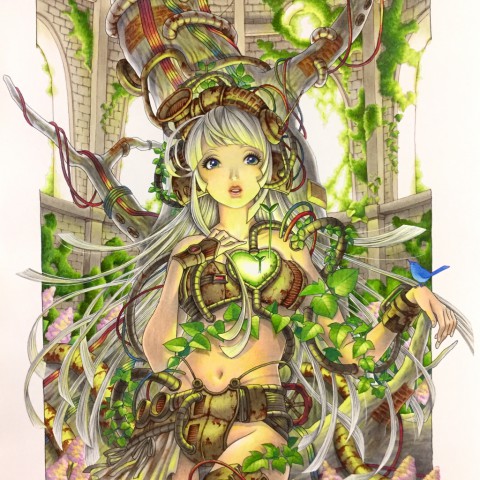 First of all, this girl in the middle has a strong impact. She doesn't look too strong but so pretty and even graceful. Also, it's fascinating that she is wearing a bit of sorrowful look at the same time. Everybody was attracted to this character. There were many entries featuring a girl character, but this piece stood out because the unique usage of greens. Color balance between greens and other colors is very beautiful. Of course, I was attracted by the theme of this piece. "Awakening from the Eternal Sleep" is very universal theme. I think many of you may recall "Sleeping Beauty”, and the same theme has been referred in various sci-fi novels, films or mangas including my father's work "Phoenix" by changing its form as Cold Sleep. It's wonderful she picked up this universal theme and succeeded to reflect that in her own world. 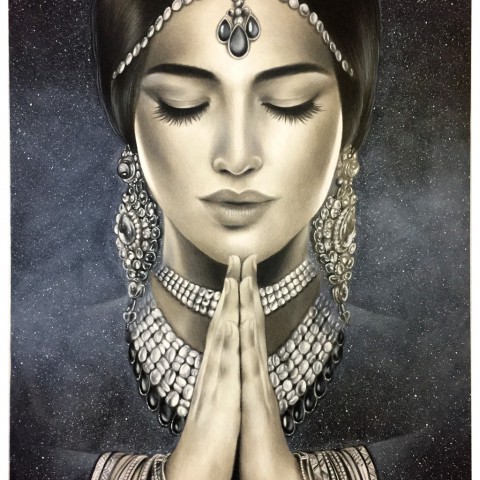 All details are drawn beautifully. At the same time every single detail has connected each other and creating one harmonious world as a whole. I like this calm atmosphere created by soft color tones. When I see this piece, I'm pulled into the world of prayer. I also feel the depth of emotion. I'd like you to keep this intensity and keep on creating more artworks. 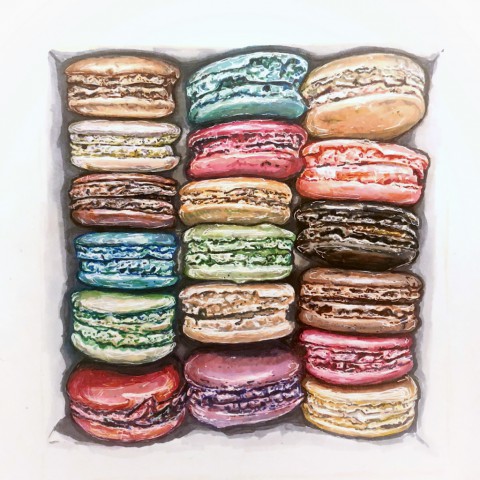 The reason I selected this piece is not because I was hungry! But these macaroons look very, very yummy - I liked the idea choosing everyday thing which we take for granted as a motif. By seeing this piece, her genuine, honest feelings or thoughts are directly getting through to me. She can stick to familiar themes like foods, but it would also be wonderful if she will expand her world by choosing completely different themes. Please keep on drawing. 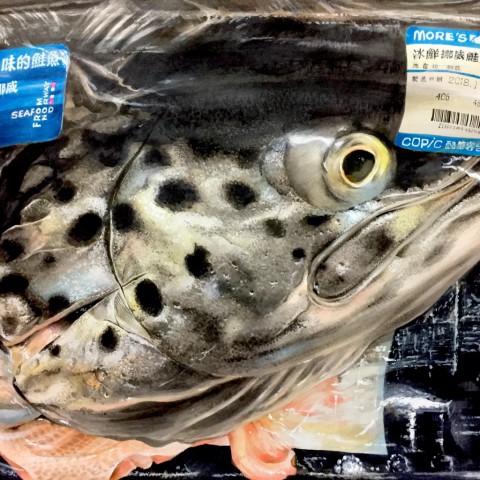 This is a very precisely depicted piece of art. We call it Super Realism - Since it looks so real, you can almost smell the fish. It means his technique is outstanding. In the art world, Super Realism has been existed for a long time but in most cases somewhat dramatic motifs are used to maximize the effect of super realism. However, the motif used in this piece is very everyday thing - This is the thing you can find in supermarket in your neighborhood. Normally people don't look at this kind of stuff as the art theme, but he was very obsessed about a salmon-head in fridge somehow and he successfully accomplished to depict every single detail with his strange passion. It is said that AI or robots is taking away people's jobs, but artwork like this is something only human can create 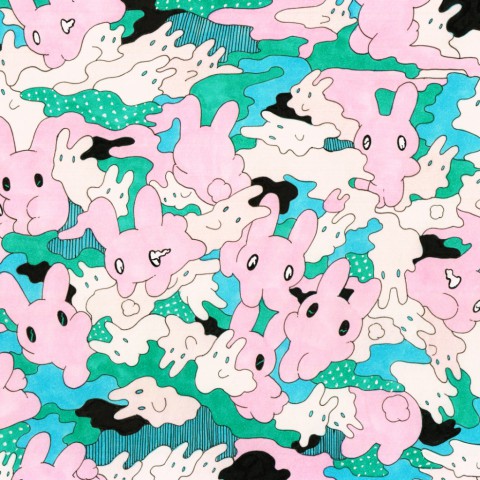 This is the artwork really stood out for me and I put a high valuation on this piece from the very beginning of judging process. Although it looks like this artwork consists of a repeated pattern which usually works well with computer graphics, it’s obvious there’s a great effect of hand-drawing. We can feel some sort of story or even poetry because we know he chose hand-drawing to create this piece. Also, this artwork is using the characteristics of Copic very cleverly. I'd love to see her other works - I’m sure she is an artist who can continue to keep her own world while changing the medium, material or theme. 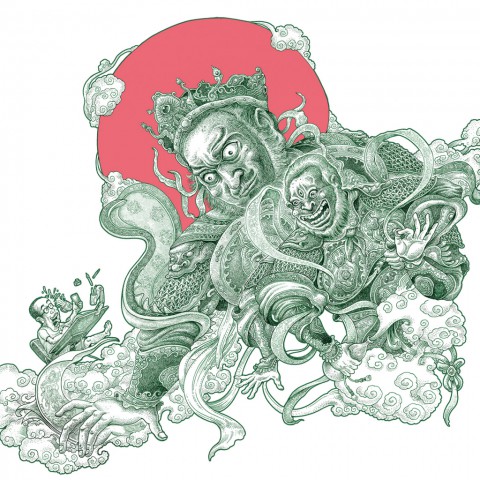 I've never been an artist, so I don’t know much about the technique, but these very exquisite touches really took my breath away. This illustration reminds me a good old satirical comic strip that uses realistic drawings to depict a story, or a message. I believe this piece portrays the God of manga who descended right in front of a confusing artist, and giving the message that says, "don't be arrogant". Overconfidence is driven by arrogance and it makes us ignorant. As the matter of fact, this is the same message my father (Osamu Tezuka) has repeatedly delivered throughout his career. Maybe this kind of pressure can even be said to be the common karma for every artist. 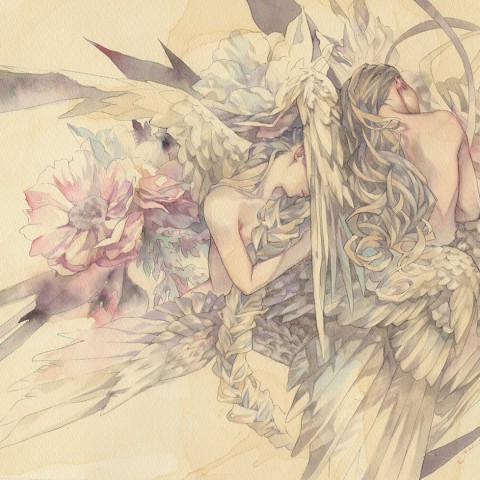 This is such a beautiful piece. I blessed with an opportunity to be the jury for this AWARD, and it was very fortunate for me to have encountered to this artwork. I fell into love with this piece at first glance - Technique is obviously excellent. Dreamy colors used here and the beauty of blank space or contrasting density are so amazing. Also, its composition is meticulously calculated considering the color characteristics of Copic markers, such as delicacy, or a sense of transparency. I hope she keep on creating beautiful art and sharing it with whole world. 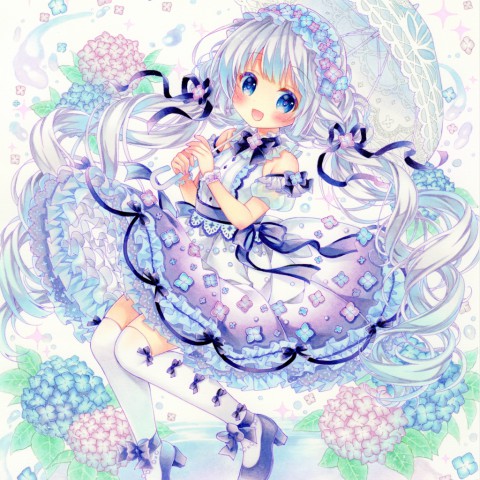 The composition and the character design of this piece is truly amazing. Also, I was surprised the fine and vivid colors original artwork has. It's not inferior to the digitally created paintings and I really felt the powerfulness or potential of analog art.
"Hydrangea" is perfect theme for the rainy season in Japan and I believe its adorable manga illustration style is appealing to Pixiv users. 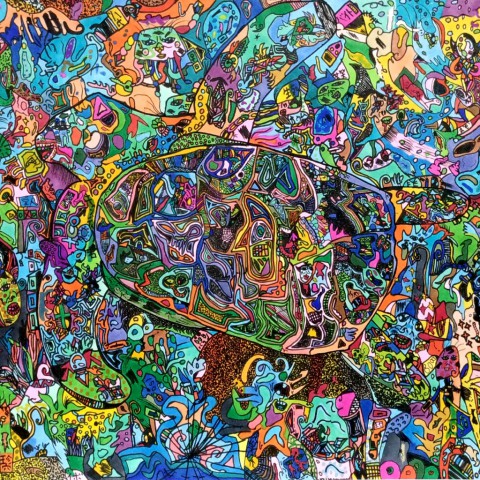 When I first I saw this piece, I was shocked – It’s such a colorful, beautifully balanced and very intricate drawing. Also, I love the title. The title “hide & seek in coral sea” shows very good sensibility. The word "coral" brings the colorful image. As the part “hide & seek” suggests, so many things are hidden inside. Of course, there is a turtle in the middle, but if you look closely, you will notice other mysterious messages like lettuce, or protein. This is an artwork that makes us think about various things and I think it's amazing. 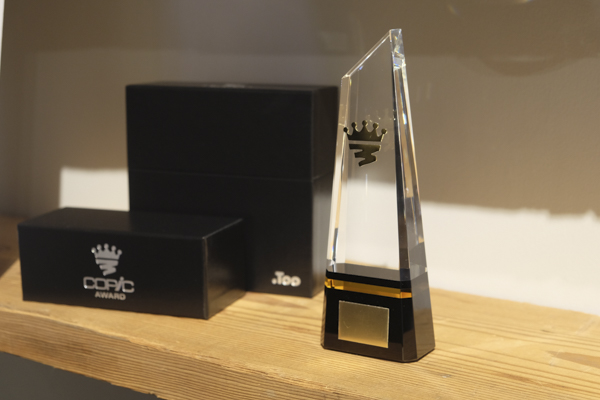 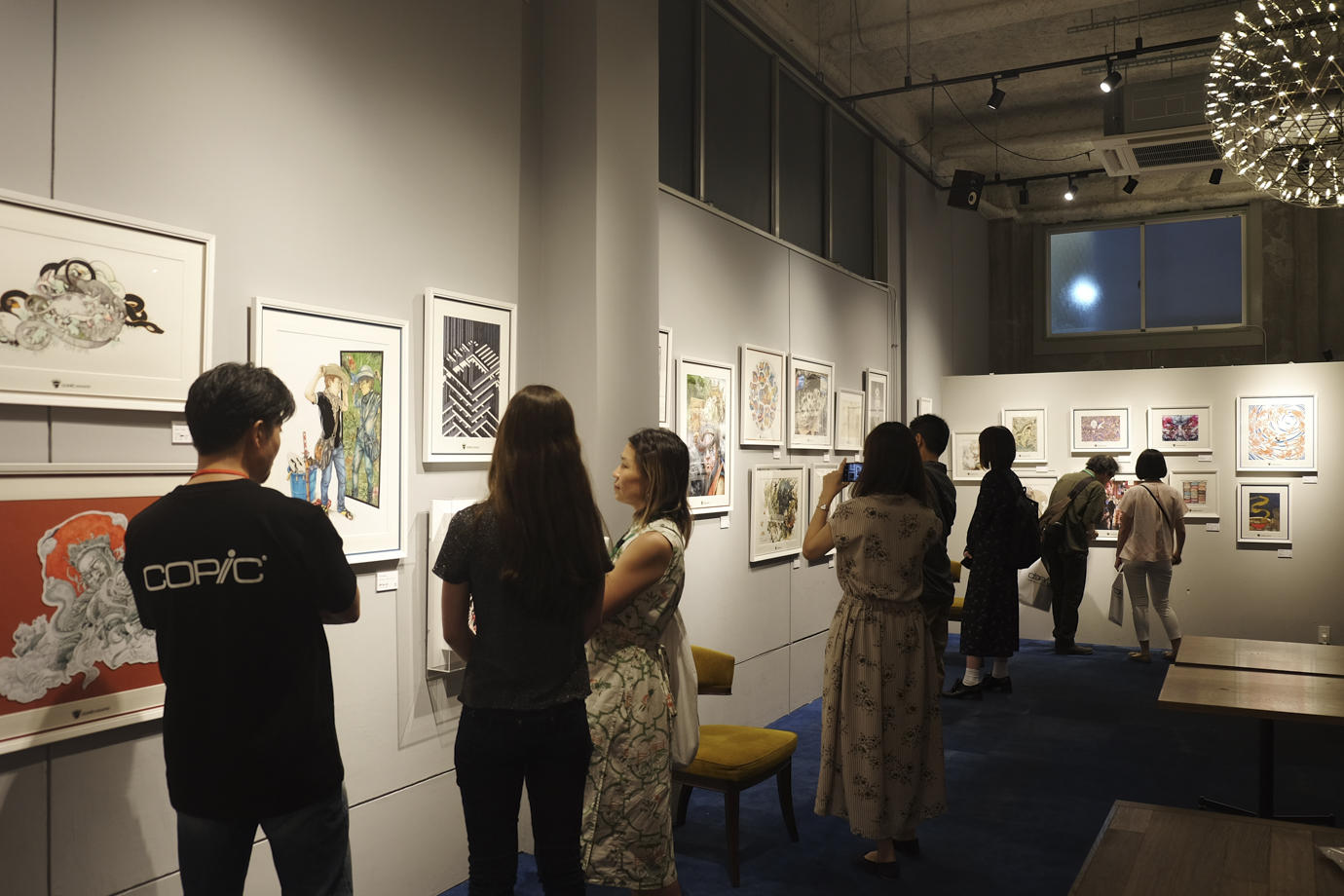 The COPIC AWARD is an international competition aimed at providing an opportunity to share the diverse artworks created using Copic and connecting Copic fans around the world to inspire each other. A wide range of excellent works across all genres gathered on COPIC AWARD 2019. This year, we received 2,108 entries from 72 countries. The AWARD presentation ceremony successfully took place at LAND Shibuya, Tokyo on Friday June 14 and the winners were announced. We recap the biggest and best moments of the AWARD ceremony.

The ceremony event was streamed live worldwide on YouTube and Instagram. The winners of Pixiv Award, Judges Awards, the Second Places and the Grand Prize were selected from the 40 shortlisted entries for the final round, after a rigid judging process by 5 prestigious judges. Gota Ishii (the president and CEO of Too Corporation) led the ceremony off with his heartwarming speech, then the winners of each award were announced by the judges. 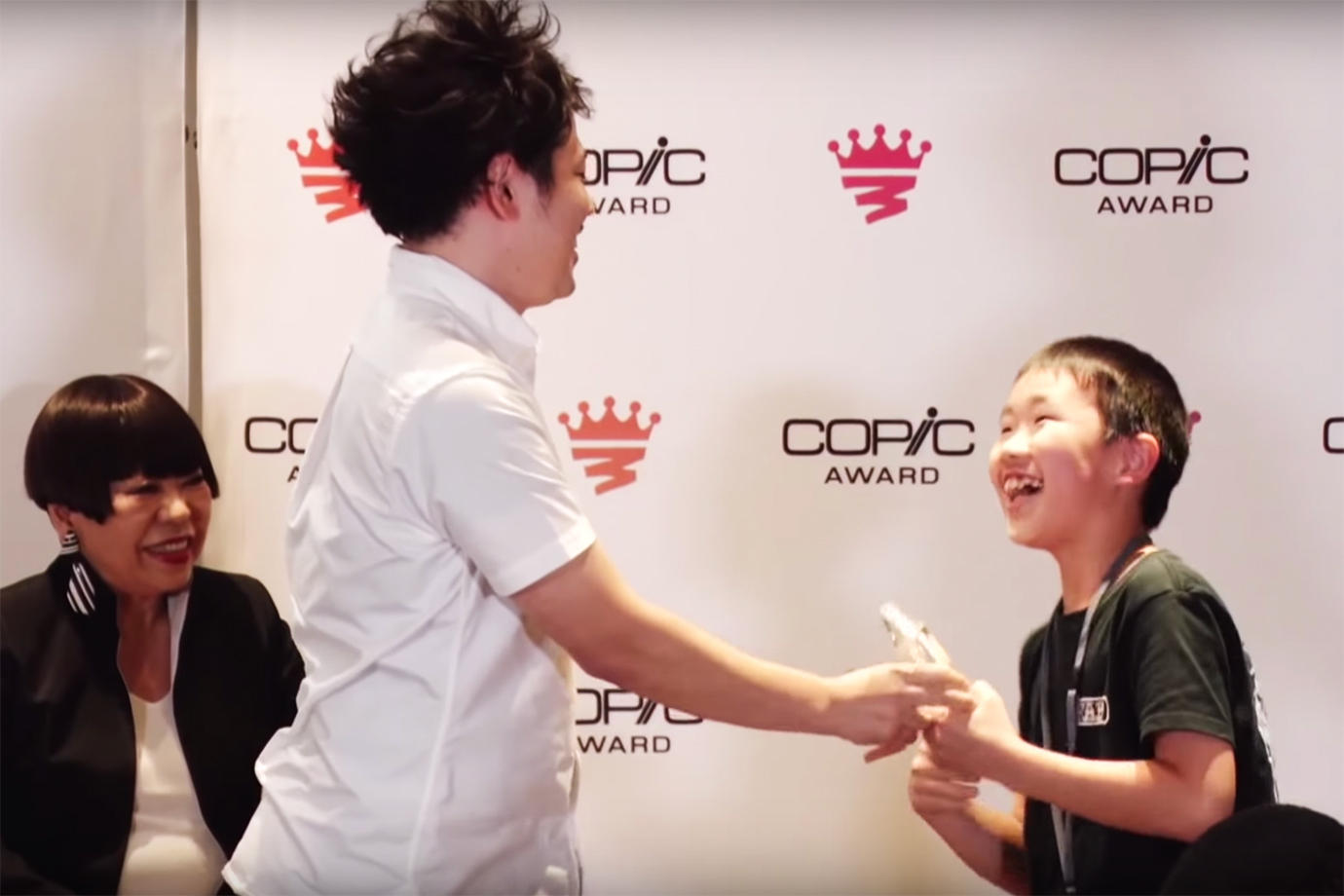 Along with existing COPIC AWARD, new “Future Generation Artist Prizes” (U-18 Award) for participants under 18 years old were added from this year. The Grand Prize went to サンゴの海でかくれんぼ (Hide and Seek Under the Sea) by Mr. Chihiro Yagyu.

He was extremely excited with the result and the ceremony really came alive here! Chihiro is only 10 years old Japanese boy, and his extraordinary skills and originality surprised everyone.

The 5 entries winning this year’s Judges’ Awards were announced. Visit the link below to read the judges’ comments for each winning entry:https://copicaward.com/winners/ 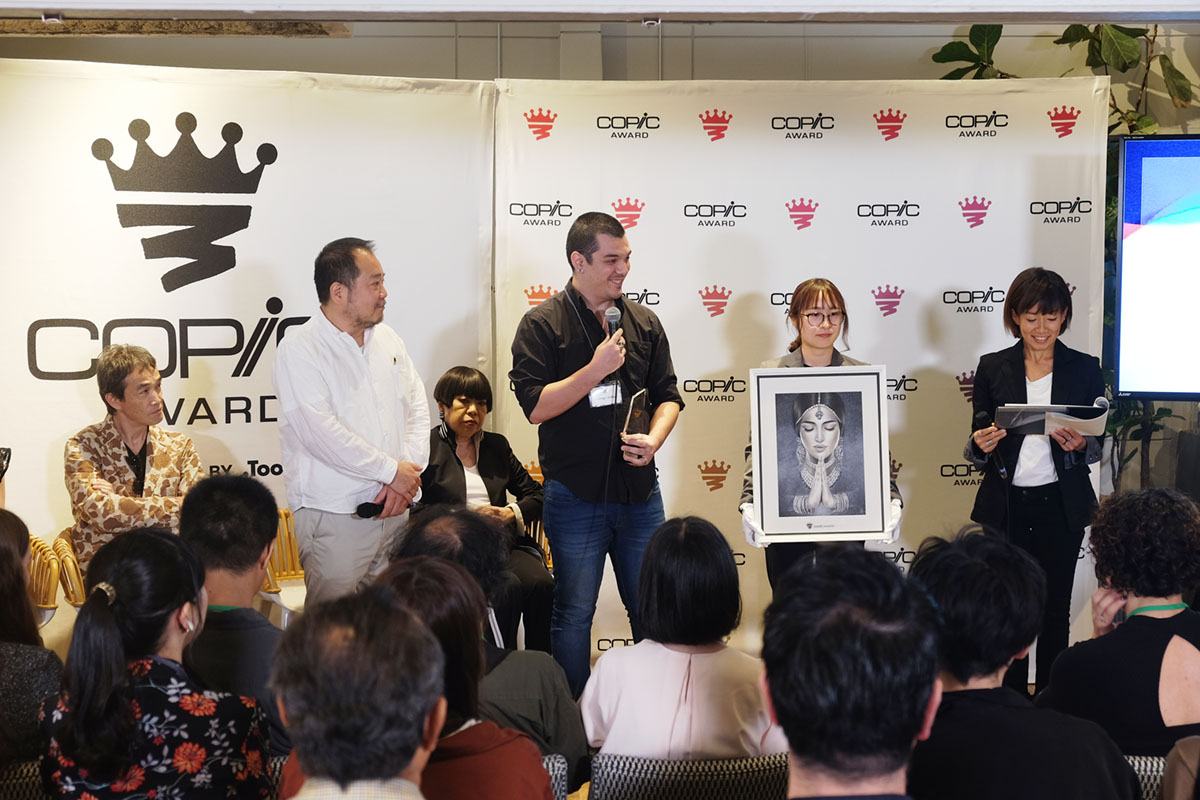 Second Place: “MOTHER” by Mr. Rodrigo Matias His excellent technique and very calm, peaceful atmosphere of this piece have enthralled the judges. Excerpt from Mr. Matias’s speech: “A few years ago, I wanted to give something special to my mother on her birthday, so I made the painting of a prayer with airbrush. She really loved it, but she passed away last year. When I heard about the AWARD, I decided to make a new version of that painting with Copic. This prize means a lot to me. My mother would be very proud.” 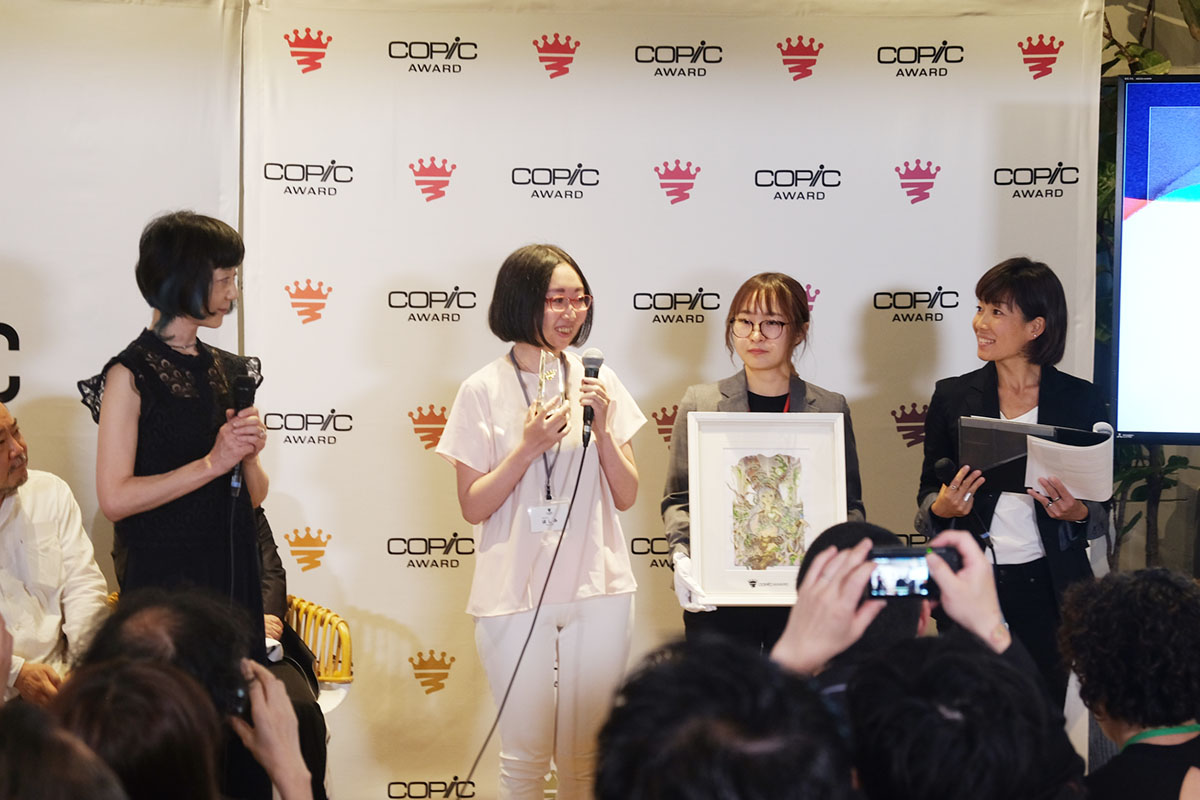 Excerpt from Ms. Hoshimi’s speech: “First, I’d like to thank my family and friends who supported me. The concept of this piece came from the old building I saw on my way to work. I noticed some tiny plants were growing from the rusted part of that building and I was impressed by that. The strong image of new life in artificial, crumbling building has really inspired me. 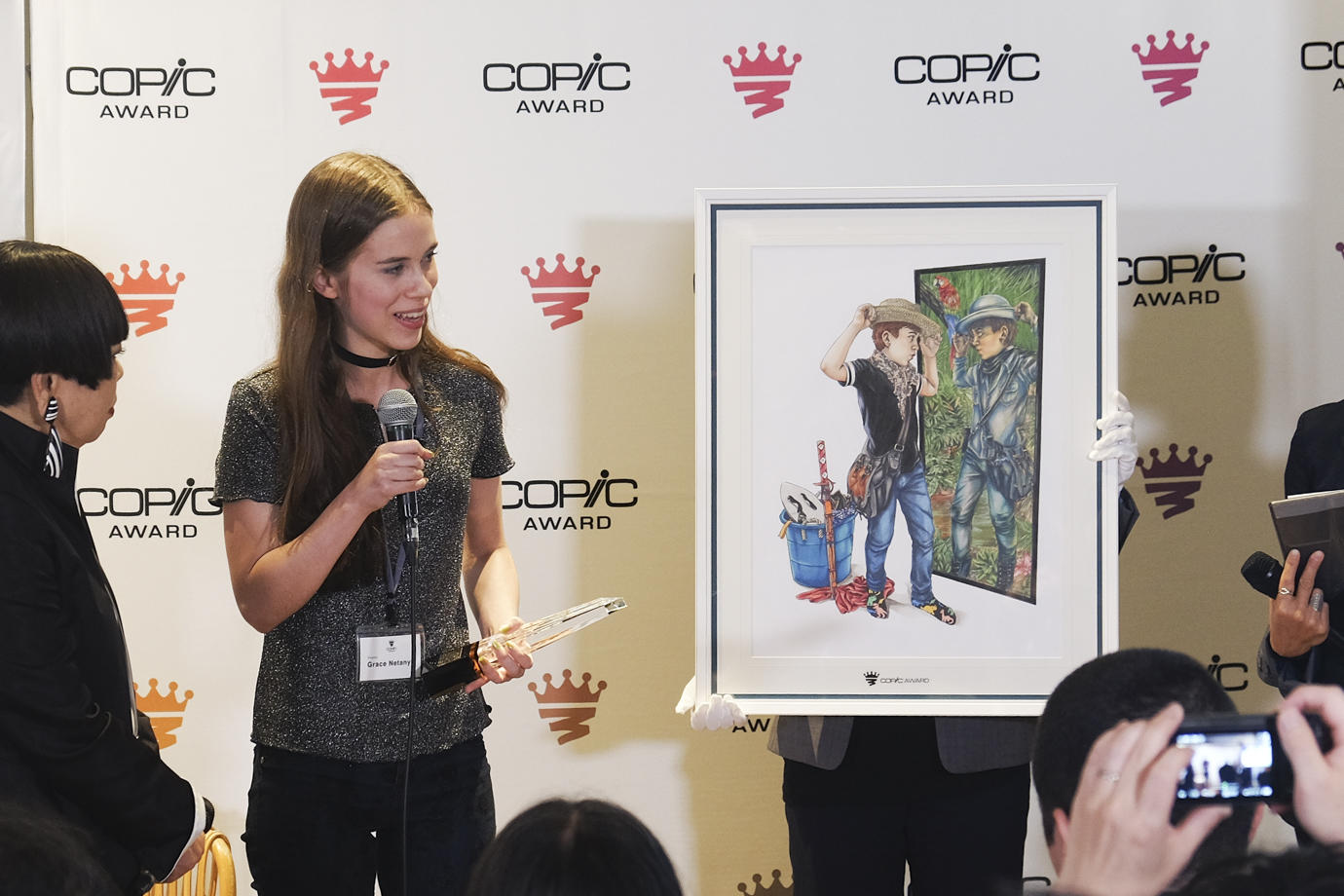 After receiving a tremendous amount of entries and a rigid judging process, only one entry was selected as the Grand Prize for COPIC AWARD 2019.The Grand Prize went to “The Explorer” by Ms. Grace Netanya. According to one of our judge Ms. Junko Koshino, the prize was unanimously decided. Her amazing talent, and the image of an innocent young boy looking into the mirror and imagining his future, were highly praised among the judges.

Excerpt from Ms. Netanya’s speech: “Since the COPIC AWARD is international competition, I wanted to create a piece that expresses worldwide theme. This young boy looking into the mirror and he’s imagining what he would like to become. Personally, it’s very important theme and I think everybody can relate to that. For me, art is always been about expressing the imagination.” 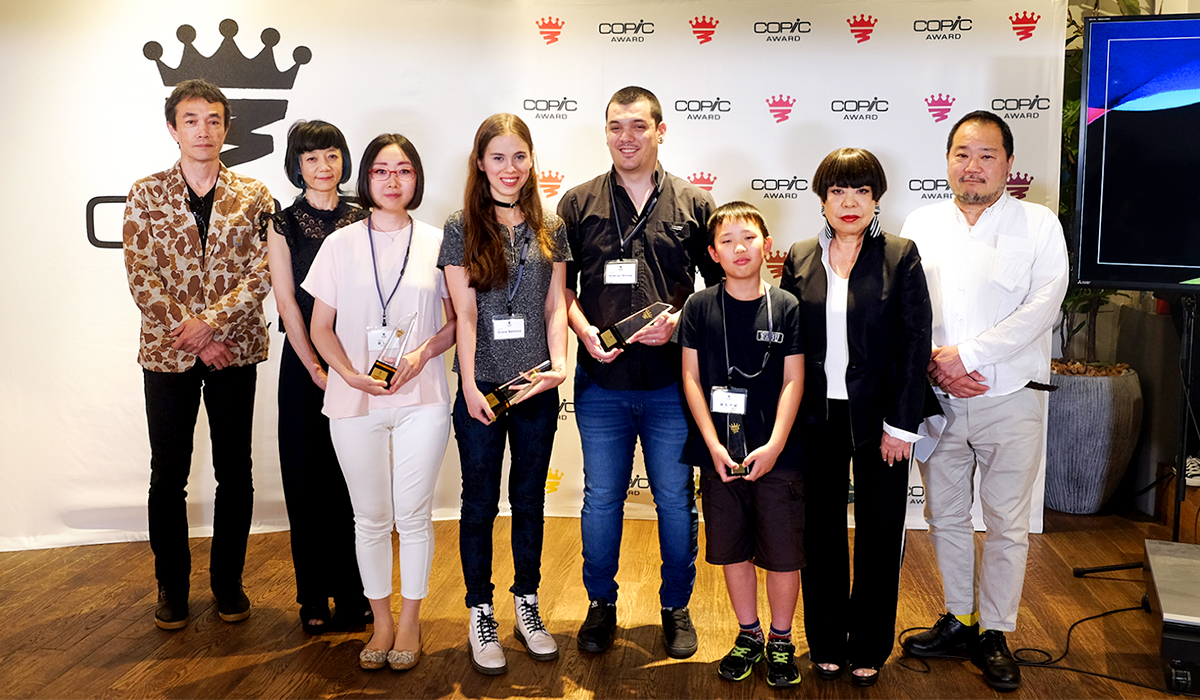 Judges and winners of the COPIC AWARD 2019

Congratulations to everyone who was nominated and an even bigger congratulations to those that won… and let’s give a huge round of applause to all participants in the competition. Everyone should be immensely proud of the great work you have created. View the full list of winners below: https://copicaward.com/winners/

The 3rd annual COPIC AWARD will officially be open for entry in January 2020. We will be waiting for your participation!